Text Reader with clear natural voice
If you want your computer to read a text on the screen, you need a program that is a text reader. These programs fall into the category TTS, which stands for Audio reader. To protect the eyes, you do not have to read a text on the computer by yourself, but just have it read aloud, which is easily possible with the software Audio Reader XL. You can read a complete novel or just a Word document. Even a non-fiction book or any text from the Internet can be listened to with this program, which converts text to voice. Audio Reader XL has a clear and easy-to-understand voice output, which is not obvious when you think of other software that is more reminiscent of a robot. When you use a text reader, you can not only listen to texts, but also save them to an audio file, such as MP3.

Read Texts in Windows with the easy to use Text Reader

Windows versions from Windows XP can use the Audio Reader XL application to hear a voice with the text reader. Texts can either be read out at the touch of a button or converted into an MP3 file, as Audio Reader XL directly includes a tool for creating audio files. For example, e-books created in audio files using the Audio Reader XL can be played back on your portable MP3 player so that you can listen to them on and independently of a computer. Of course you can burn these files from text reader converted to a DVD or CD and listen to it with the car radio. Even on your smartphone or tablet, you can access these files on the go. The software also allows converting PDF, Word documents or EPUB from text reader. 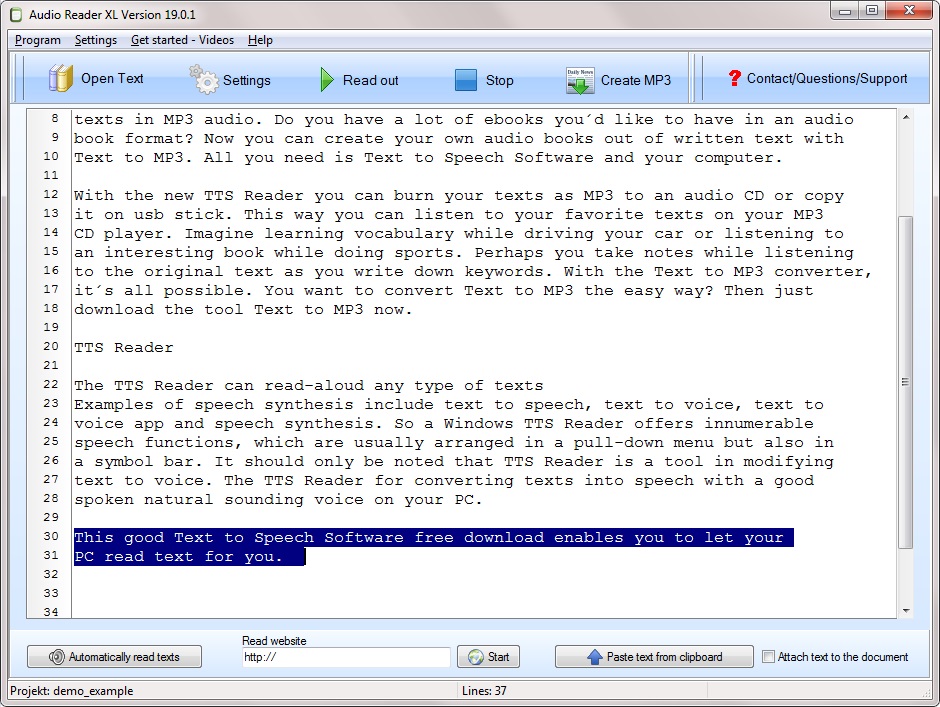 If you want to translate a text with the text reader, the Audio Reader XL program allows you to converge texts
Completely automatically have thrillers read or a story translated from text reader when you’re in bed. It is very easy to use the software and to read texts in all formats. If you have created an audio book yourself, convert the text to mp3 and let your friends and acquaintances share it. The conversion from read aloud texts requires only a few mouse clicks. You can also insert pauses in existing texts before they are converted. You can also choose from different reading voices here.

The Audio Reader XL reads any text directly to your computer. This cannot be just an existing text. It can also be extracted from an MP3 file. No external audio converter is needed to convert, as all features are already integrated with the TTS conversion software. There is little text reader software with a voice reproduction in this high quality at this cheap price in the market. For different Windows versions you can download from the Internet.

Have you ever tried: Text to MP3 on the PC
Audio Reader XL is a fully functional text to MP3 application that can read both text and WAV or MP3 files. Main features of the program are: an intuitive interface design that automatically highlights the currently read text, reads from a WAV or MP3 file, pronunciation corrections, support of RTF files, omitting sentences or whole paragraphs, reading the clipboard, reading Control Tags, global hotkeys and documentation for all important functions.

Text to MP3 Windows 10 is no longer an issue. It’s really easy nowadays.
The Audio Reader XL is a handy Windows 10 app to convert text to speech that converts text, text, documents, books and other electronic documents from text to speech. This text to MP3 app is available for Windows 10 and Windows 7, and a Windows 10 Mobile version is in the works. The software is available as a downloadable version and can be a useful app when reading an electronic document. This text to MP3 tool provides support for multiple file formats, marks read sentences, and allows the user to create their own content to be read. Text to MP3 with the Text to Speech Software

Text to MP3 on Windows is very easy
The user interface in the text to MP3 for Windows tool, which is also available for Windows 7, is not overly complicated and offers many options to suit the user’s needs. You can configure font size, color schemes, automatic scrolling and much more. If you are looking for a text to MP3 tool, the Audio Reader XL is worth a try. It’s convenient to read emails or written projects to see what it sounds like. If you do not want to afford a personal secretary, you will find in this generator for text to speech a fully equipped software package, with which one can read text as well as save to WAV or MP3 files. It has a very easy-to-use interface that consists of a text box where you can type or paste text. When reading, text is highlighted with a blue cursor. If you want to save the file for listening on an external device or share it with someone else, you can save the file in WAV or MP3 format. MP3 is recommended because it takes up much less storage space and offers more options for adjusting the volume.

Convert Text to Speech and Text to MP3

Whether converting text to speech or text to MP3, all with one software!
If you want the TTS software to only read certain paragraphs, you can instruct it to skip sentences or entire paragraphs while reading. You can also save the reading segments in the clipboard, to later fall back on it. If different parts of the program do not suit you, you can change the pitch, volume and speed, or you can choose a completely different voice. As the voices sound more natural, use of the software in text to MP3 facilitates content interaction, especially for e-books, screen readers, and other third-party apps. Some people have difficulty grasping large amounts of text due to dyslexia and other learning difficulties. Text to MP3 gives you an easy way to learn content from web pages and is a great way to get involved. Some people have only a basic literary level. They are often frustrated when trying to surf the Internet because many of the content is in text form. By reading the text to MP3 instead of reading it on the video, they can get valuable information from way in a more comfortable way.

Text to MP3 with Natural Voice

The most important thing about Text to MP3 is a natural voice
With the language option for those born abroad, a new attractive perspective opens up for this target group. Many people who immigrate to another country learn to speak and understand the new language effectively, but still have difficulty reading that language. Although they are able to read content with a basic understanding, it allows them to text to MP3, record the information in a different way that makes them more familiar and this make it easier to understand and keep the content.

Are you interested in reading the topic text? The application with which the conversion of texts into voice is called TTS software. Such text to voice software for Windows has innumerable speech features that are usually listed in a menu or bar with icons. Examples of read aloud text out are text to speech, voice to text app, speech to text online as well as TTS voices and the like.

It should only be said that text in-voice software is mainly used to enhance voice, but sometimes also as speech to text online. Isabelle lives in Oakland, 27 years old, would like to order something intriguing about using text reader for herself and her husband. She has been philosophizing for a long time about what she could possibly afford with her very mediocre income so totally impressive about TTS software on the web.

Meanwhile, while jogging in the city, you come up with a bunch of brilliant things. However, she does not want to be bound by what she concludes. On this occasion, she looks for ideas on what she could be particularly fascinating to TTS software.

Your colleague has plenty of recommendations and does not leave them alone when making a purchase decision. When she has decided what she wants binding, she surfs and in the end gets herself this high-quality article. You want to know more about text to speech? A tool for making texts read aloud on the computer is called TTS software. Such TTS software enables a wide range of speech functions, which are usually lined up in a menu or even in a bar with icons. Common names for speech synthesis are text to speech, audio file to text, text to speech reader and text to speech download et cetera.

It should be mentioned here that speech synthesis software is used primarily for the processing of speech, but also as google text to speech online. Download charge less TTS software for PC
Through the text to voice reader, you can directly read a text and create multiple MP3 files. The TTS software has countless features such as having a document read aloud with a natural-sounding voice. On our website there are things to search for TTS software and TTS reader.
With the help of the user-friendly text to speech reader you can read a text online and create several MP3 files. The text to speech reader has lots of features such as reading websites with a natural-sounding voice. The text to speech reader to convert text to voice scores points through an exemplary spoken speech output.
Depending on the setting of the options, the TTS software is located in the background and texts are read automatically as soon as the Windows buffer changes. Thanks to the functions of the text to speech program, it is easy for anyone to read a text online as well as convert it into an audio MP3 file and enjoy it while driving, with your MP3 player and at home as often as you like to listen. There are plenty of voice programs to download, but the software convinces by intelligible reading.

In our offer there are articles around the product TTS software and text to audio. Occasional shopping should make fun in the best case but also be sure.

The TTS Software has many features such as reading a PDF with a good voice. The TTS software lets you read a document and create multiple MP3 files. At your request, the program is for read aloud text aloud in the Windows background and it texts are read automatically fully automatically, in the moment where the Windows cache changes. There are many programs to download, but the program differs from other programs by its voice. The TTS software to read the text convinced by an exemplary understandable voice. With the help of the TTS software, it is very easy to read texts and convert them into an MP3 file and listen to them as often as you like in your car, with the MP3 player or also at home.

The expert use of the help of the read-aloud program makes it easy for the user to read a text online as well as to convert it to an audio file and listen to it as often as you like when driving a car or in your flat. Depending on the setting of the options, the text to speech program works in the Windows background and a text is automatically presented at the moment the Windows cache changes.
The TTS software to convert text to voice scores points through an exemplary spoken voice. There are many downloadable voice programs, but the software differs from the other software in its voice.